Water Bags and a Flat Tire

I've spent too much of my oh-so-precious time deciding whether to organize my Ghana blogs chronologically or thematically, so I've decided to stop the thought process of how to organize and just write.

Excitement, curiosity and sheer exhaustion washed over me like a wave as I first stepped off the plane in Accra. If for some reason I had doubted the pilot's word that we landed in Africa, the blast of humidity that immediately hit me would have convinced me that he was correct.

The cold weather preceding my trip and my lack of tolerance to it had me irrationally excited at the prospect of warmth. I couldn't wait for the embrace of the blanket of heat to wrap around my constantly frozen exterior. However, the warm comforting blanket I expected turned out to be a bit more stifling than I'd hoped for. Sweat immediately cascaded down every inch of my skin and continued to do so for the duration of my stay in Ghana. Sometimes there were fans, but more often than not, the only way to attempt to escape the shroud of debilitating humidity and heat was to sit as still as possible wearing the loosest garments in your possession.

Anyways, before I get too sidetracked, let's get back to my arrival in Ghana (see that, I guess I just decided to do this chronologically). Getting through customs was easy enough, but baggage claim was a different story entirely. Actually, the reason it took me so long to get my suitcase was because the damage done to it in transit transformed it to the point it was unrecognizable. When I finally realized my bag was my bag, I grabbed it, took a deep breath, and headed outside to find my ride. 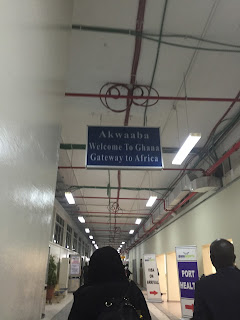 I almost instantly saw a man holding a sign with the name of my volunteer organization on it. I was instructed prior to the trip to insist on seeing his I.D. but he just shrugged and said he left it at the volunteer house. Great. I was potentially about to get kidnapped. I went with him anyhow; he seemed relatively harmless- a teenager named Elvis.

Another volunteer had been waiting for me in the cab since my flight was delayed. I sat down beside her and felt the sweat on my back plaster my shirt to the seat of the car. Better get used to this, I thought. Finally, we were off to the volunteer house where we were to spend our first night prior to heading out to our specific placements.

Of course, something just HAD to happen en route to the house. As we drove along, a loud rattling sound began to come from the car and the driver rolled down his window and looked to the back of the car, discovering a flat tire. For WAY longer than he should have, he continued to drive. Eventually, however, we pulled over in possibly the worst part of the road possible and called another cab. We made it to the volunteer house exhausted and very, very parched.

Elvis immediately taught us about how drinking water works in Ghana. Yes, it needs to be explained. He led us to the refrigerator and grabbed two clear bags and handed one to each of us, then told us to bite the corner and suck. Turns out that is how they drink a lot of things- shots of alcohol, yogurt, and more. Okay, that's enough typing for one post. Stay tuned for more! 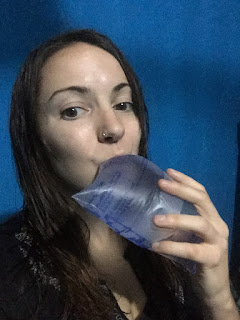