I was starting to believe that I had a curse upon me, seeing as how right when I arrived Joel got sick. The kind of food poisoning you wouldn't wish on your worst enemy. We called it an early night and he headed to his hostel and I to mine. I had this nutty idea that I would somehow get good sleep at Humble Bumble. Not the case. Music began blasting around 9 pm and didn't stop until 2 or 3 in the morning. I don't mean the kind of loud music you can block out with ear plugs, by the the way.

It made me look back at my late teens and early twenties and wonder how on Earth I had the energy to do that while traveling- stay up until the wee hours and dancing and chatting and drinking. I am so, so over it. 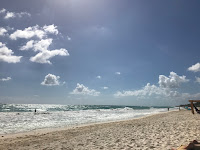 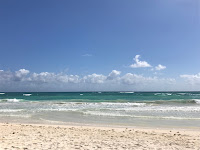 The next morning, Joel met me at Humble Bumble because mine had free breakfast, but he decided his stomach was still too wonky to try and eat at the moment. So I scarfed down my omelette and we headed to the beach. Joel was beginning to get weak from the food poisoning, so we took a cab. Then we spent essentially the entire day on the beach, lying in the sun and alternating between reading and napping and, in my case, journaling. It was so relaxing for me but I felt horrible for Joel. He just seemed to feel worse and worse as the day progressed. Finally, after having been on the beach for like 9 hours, we headed to a nearby restaurant where I ordered him s side of white rice to try and get something in him. I had beans and rice and friend plantains, as well as some of the best guac I've ever had.

After eating some of his rice, Joel straight up had to lie down, which was fortunate because we were eating on a couch. We then walked slowly to find a cab that took us to a pharmacy so I could pick up some NyQuil for Joel which they didn't even have so I just got something just looked like NyQuil. We then went our separate ways.

The next day when Joel met me for breakfast, he looked so extremely depleted. Much to both of our surprise and delight, there hadn't been any music the night prior at either of our hostels so we finally got a good night of rest. Joel was so low on energy he didn't even think he could make it to the beach. So I went for a quick jog, he lied in a lawn chair and waited for my return.

When I got back, I had sweat trickling from areas I didn't know sweat could come from. I was ready for a shower, and needed it especially after 7 days without one. I got into the shower with a head dribbling out cold water at the lowest water pressure you can imagine, soaped myself up from head to toe, and then guess what happened? The water ran out after about two minutes. I mean, I was so annoyed but based on how the trip had panned out so far, I wasn't shocked. So I put a mug under the tiny trickle of water dripping from the sink until it was full and then repeated until I got the soap off of me. It was the most magical shower of my life.

Afterwards, I returned to Joel who was then lying in a hammock reading. I lied down on a lawn chair beside him and did the same. I told him I was going to venture into town for a bit to try and find him meds and get myself a drink from Starbucks. Town was relatively close, and it took me no more than ten minutes to find some Pepto at a pharmacy. That finally seemed to improve Joel's condition, but he was still so weak and just wanted to lie around and read, which was fine with me. At the end of the evening, he took the cab back to his hostel and I went to my room in mine. And that's where my six-seven day saga of puking and nausea began. 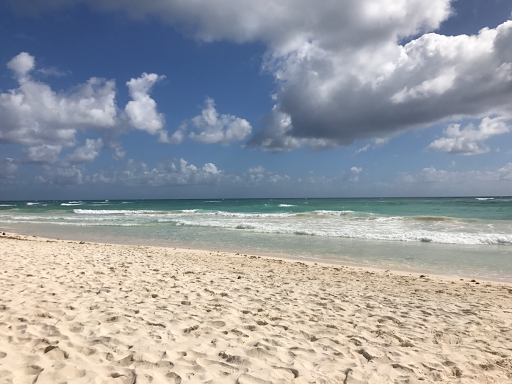