The Most Boulder Thing

It takes awhile before I can see the humor in something "horrible" that happens in my life. I'm trying to shorten the duration between the event and my ability to laugh at it, however, and I'm doing so in a couple of ways. First, while the unfortunate instance is happening in real time, I remind myself that it will make a good story later. Second, I force myself to talk about these events and write them down. Which is exactly what I'm about to do.

So, first a little bit of background information is necessary. One of my yoga teacher friends sells these things called sanlakpas which are single gemstones that you secure around your neck with a string tied together. The knot is then sealed with superglue, as it is meant to remain in place until it naturally falls off. You are supposed to come up with an intention represented by the gem. While you wear the sankalpa, you embark on your journey to fulfill the intention it represents. Yes, it is exactly what you would expect a yoga teacher to sell.

Being the indecisive human being that I am, I struggled to decide between three stones- labradorite, rose quartz, and garnet. I saw a picture on my friend's website where someone was wearing three which made me realize that I don't even HAVE to decide. I got all three, and before each one was tied on I was led through this little ceremony to seal the intention into the sankalpa. I know. 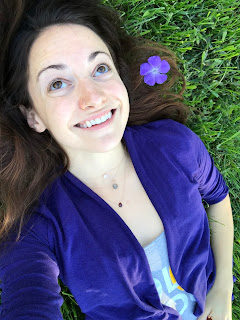 I've been wearing them for about a month, and have gotten completely accustomed to their presence. To be honest, I would feel a bit naked without them around my neck. I feel comforted when I reach up and touch them. I had almost entirely forgotten that they were there when I went to the imaging department and the medical center for X-rays when I injured my shoulder.

The X-ray technician asked me the typical questions while strapping on the vest thing that supposedly blocks out some of the radiation, like wether or not I was knocked up and whether I was positive that it was my right shoulder that I injured. She then saw the stones around my neck and told me I needed to take off my necklaces. The look on her face as I told her that I couldn't because they were secured with superglue was priceless. I suppose the majority of people would have ripped the sankalpas off or requested scissors to do so, but I felt that the journey of my intentions were not yet fulfilled. I explained that it was a yoga thing and told her I wouldn't remove them. She heaved a sigh, said it was "the most Boulder thing" she'd ever heard, and asked me if I could fit them in my mouth (giggity). She definitely enjoyed watching me struggle to do so, but I'm sure I would have done the same if I were her.

So for a good twenty minutes or so I had three gemstones in my mouth, secured with my lips, because I believed that they had more work to do in my life. Which is one of the most Boulder things I've ever done.