The Renaissance Festival is truly successful in extracting the inner child from every visitor. I couldn't count the number of grown women dressed as fairies adorned with floral crowns and glitter, nor the number of people of all ages partaking in the jousting ride. Whether you are collecting action figures or social security, a trip to Larkspur during a summer weekend will be an unforgettable one.

The food was the only disappointment for me, but it was nothing other than what ought to be expected of festival food. As described in my previous post, that included putting everything on a stick and dunking it in a deep "fryer" (not to be confused with Friar). However, I assumed I was safe from clogging my arteries when I selected the portabella mushroom sandwhich. WRONG assumption, Marisa. That thing was swimming in grease like a toddler in the deep end of a pool. Nasty.

One highlight of the day (among many) was the series of jousts. Due to a few late risers in our group, we arrived too late to see part one. However, parts two and three were easy enough to follow on their own. In part two, Sir William and Sir Rodrick partake in some friendly jousting which goes sour when Rodrick decides to cheat. This pisses off William to no end, thus he decides the only way to make up for Rodrick's slap in the face to chivalry is to have a joust to the death at the end of the day. A sort of medieval form of "to be continued". The third and final joust, was the icing on the cake, and even incorporated some elements of pop culture from the movie Avengers. It was a hilarious and subtle injection of comedy into the theatrics and much to the audience's liking. 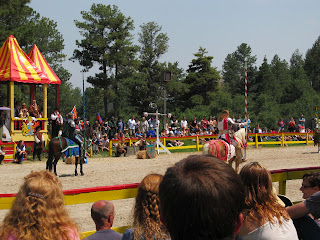 I left covered in the dust of Larspur and a bit of a sunburn on a patch of skin that was somehow deprived during my sunscreen application which I had thought was meticulous. Yet the smile on my face and the memories incurred cancel out dusty and sunburned any day.
at June 11, 2012