When I am in the Same Room as Paul Dano...

...I tend to get a little crazy. The mere knowledge that he would be participating in an audience Q&A along with Zoe Kazan, Chris Messina and the directors from Little Miss Sunshine guaranteed the advanced screening of Ruby Sparks at the Hammer Museum a spot in my agenda. Not penciled in, either. I wrote down that event in Sharpie. Apparently I was not alone in that sentiment. Even arriving one hour early proved insufficient, and I found myself waiting in the second twisty-turny line in two days for a film. I now see why people say you wonder how you ever lived sans smart phone once you have one. Thankfully the Hammer has free WiFi. 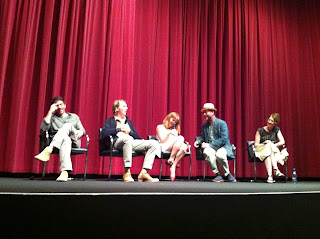 I feel like I am taking advantage of the Hammer by not becoming a member. As a venue, it opens its doors to me and welcomes me warmly, and I look down on it condescendingly and laugh- PSH, you WISH I would give you money! I feel like the guy who turned down Oliver Twist when all he wanted was a little more gruel. I mean, $50 a year for membership is basically gruel. Maybe I could justify it if I get a job.

The kindest thing the Hammer has done for me thus far- introduced me to Paul Dano. Now I feel like I'm livin' the LA dream. Somehow, I could handle being in the same space as Brooke Shields like a champ. Not the case with Paul. As the Brits say, I got a little bit "mental" when I saw him. My expectations were just that- I would see him on stage and our enconter would end there. However, after the Q&A I some strange wave of courage overcame me and I decided to be "that fan" and ask for a picture. Perhaps provoking this uncharacteristic gesture was the fact that I was in the front row, so only about 2 feet from him. This proximity, and other individuals asking for his autograph (a request to which he humbly obliged) eventually brought me to his side. Then I made a huge idiot of myself.

Me (tapping Paul's shoulder): Um, hi, could I be the annoying fan and ask for a picture? (not having considered that I had no one to take a picture for me)
Paul: Yeah, no problem at all
Me (handing phone to closest person): please take a picture of us!! You just hit the button...
(She gave me a weird look)
Paul: So what's your name anyway?
Me (a name?? What's that?): Uh, Marisa! I love Little Miss Sunshine
Paul: Well, thanks a lot!
Me: K thanks!

I found it difficult enough to stand on wedges when I wasn't under a celebrity induced shock. After shaking his hand, my legs turned to play-doh. After the crowd thinned, I recognized someone I had met at a prior event at the museum. That guy has been in the biz for awhile, so he greeted all of the actors with total ease. It's going to take me a long time to be able to do that. Eventually, only he and I and the actors and some of their friends remained. I had ample opportunity to continue conversing with them, but I found my thoughts limited to "I just met Paul Dano" on repeat. 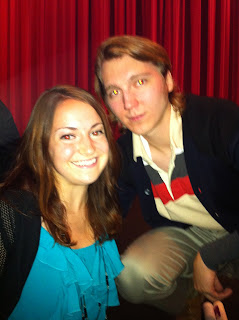