That's my argument and I'm sticking to it like the noxious rubber cement that schoolchildren use. Or, that they used in my early scholastic days. Still determined to meet people who share my interests, I signed up to attend a local vegan potluck tomorrow. Proper potluck practice (determined by the public patrons for potlucks?) dictates that atendees bring a dish to share. Up to my ears in blueberries and bananas, I elected to concoct a culinary creation utilizing both (what's with all the alliteration today?). I considered saving the blueberries for my morning cereal, but opted otherwise. After eating my weight in the fruit over the past week, I was beginning to feel like this:

And we all know what happens to that girl. If you are scratching your head in confusion, I'm sad for your tragic youth and order you to rent a copy of Willy Wonka & The Chocolate Factory. The Gene Wilder version, not the Johnny Depp abomination (unless you wish to trigger a series of particularly disturbing nightmares).

I switched on Julia Child mentality and sprang into cooking action. Thankfully, one of my three handy-dandy vegan cookbooks (in this case, How it All Vegan) contained a recipe for blueberry banana muffins. Since our kitchen lacks a muffin tin, I modified the recipe and turned it into a bread. I am a culinary magician. Other Marisa modifications included adding vanilla extract and using almond milk instead of soy.

Here's what goes into the bread: 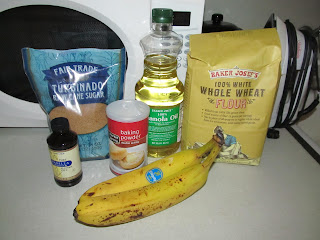 Trader Joe's should pay me for this free advertisement. Not pictured: blueberries and the carton of almond milk. They were feeling shy and unphotogenic (slash I had already used the blueberries when I snapped this photo and forgot the almond milk).

1) Preheat oven to 350 degress. Spray a bread pan with cooking spray.
2) Combine the dry ingredients (flour, powder, sugar, flaxseeds) in a large bowl
3) Add the oil, milk, mashed bananas and vanilla and stir to combine
4) Gently fold in blueberries and spread batter in prepared pan
5) Bake for about 60-70 minutes, checking readiness by inserting a knife in the center 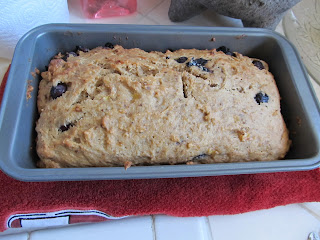 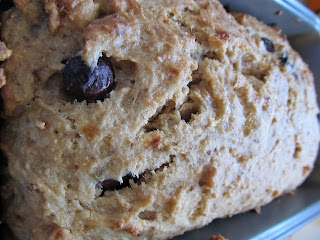